What is Pearl’s eye color? What is Anna’s wildest goal? Do we have favorite writing snacks? Why don’t you keep reading to find out! 😀

Since we’ve both been tagged by the amazing Allyson Kennedy to do this tag, it should be titled “Get to Know Us Writer’s Tag”! 🙂 THANKS SO MUCH, girl!! Check out her post here.

(and yes, both of us have always loved to write fiction! 😀 )

Nickname: Ooh, millions. XD The obvious answer to this one is “PerAnna”, a mash of our two names.
Anna: Anna-Banana, Annie, A+, An (said “on”)
Pearl: Pearly, Pearly-Squirrely, Page, HOOW (Like, as in General Howe… whaat?)

Eye Color: We both have chocolate chip colored eyes… although Pearl’s might be darker… 🍫

Braces/Piercings/Tattoos: none of the above! Although I (Anna) hope to get braces someday, and we both might get our ears pierced sometime just for fun. 😀

Righty or Lefty: We’re both RIGHT! (haha get it?)

Ethnicity: Sooo many… some being Austrian-German, Scotch Irish, Cherokee… and more!

Novel Written:
Anna: Working on a YA speculative history titled “Eagledare” (kudos to you if you spell it correctly as ONE word 😛 ) that is currently at 65k but speeding toward 80,000 total. We’ll see when I finish it… 😉

Pearl: My main WIP “Ellie’s Secret” is at 20k right now and I’m really enjoying writing it!! Maybee I’ll publish that one…

Novel Completed: Not yet! *cheesy grins*

Award for Writing:
Anna: I’ve won a contest or two for short stories.

Conference: N/A though we’ve been to plenty of homeschool conferences! 😀

Query/Pitch: Tell us what this is… jk 😛

Novel (That You Wrote): N/A

Time to Write:
Anna: Early in the morning or late at night 😛

Pearl: Late at night or when supposed to be doing English grammar :O

Pearl: Hmm, this is nearly as bad as asking my favorite book!! 😉

Writing Memory:
Anna: I love remembering that one time I showed a tiny bit of a short story to my younger sister ( with me waiting around nervously like every author) and she started bawling. 😮 I felt so bad but also a little elated. XD

Pearl: I told my Dad about my recent short story WIP “101 Aches” and he started suggesting things, and then as I told him more he was like “Stop! You’re gonna make me cry!” (Which usually means it must be good. So I was like “Cool!” :D)

Currently Reading:
Anna: Matched (edited aloud by my older sister XD) by Ally Condie, Through All Things by Malachi Cyr, The Four-Story Mistake by Elizabeth Enright.

Pearl: The Swamp Fox and the driver’s manual 😀

Writing:
Anna: Besides this post? lol A short story called “Confidential”, blog posts for my personal blog, journal entries and emails, and random cool scenes that should go somewhere in my WIP novel “Eagledare”.

Listening to:
Anna: “Masterpiece” by Danny Gokey, “King of Love” by I Am They, “Even If” by Mercy Me

Want to be published?
Anna: Definitely. 🙂 Working toward this as a goal in the near future, Lord willing!

Pearl: Yas. That would be sooo cool! 😀

Indie or Traditional?
Anna: Indie mostly, but definitely would be cool to get specific ones of my Middle Grade stories traditionally published so they’re more out there. 😀

Anna: LOL I honestly don’t know… play Eponine on Broadway? Become a New York Times bestseller? See my novel made into a movie by Walden Media (because they do sooo well at making movies of books!) ? Adopt 20 babies?

Pearl: ???? (That’s my brain wondering what in the world my wildest goal is). Hmm… I would love to live in a farmhouse on a farm (obviously on a farm :P) and have a cool family and own lots of Dexter cows and ten dogs and those lovely kittens that hang out at milking time. Get to act in a Christian movie. Train amazing service dogs. Publish four billion good books.

Thanks again to Allyson for tagging us, and we hope y’all enjoyed getting to know us a little better!

Tell us about YOU! What color are your eyes? What is your wildest goal? 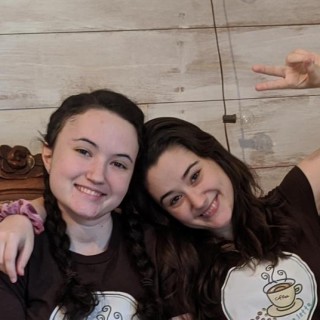 We are two goofy sisters who love life. Part of a ministry family of nine with little to no spending money, we have become somewhat professional at penny-pinching and dollar-stretching. We’ve gotten good at having fun without a lot!

© Life Without a Latte, 2018. Unauthorized use and/or duplication of this material without express and written permission from this site’s author and/or owner is strictly prohibited. Excerpts and links may be used, provided that full and clear credit is given to Anna and Pearl and Life Without a Latte with appropriate and specific direction to the original content.
Create your website at WordPress.com
Get started
%d bloggers like this: